Grimsby is known as “Europe’s premier food town” due to it’s historic involvement in the fishing industry.

Fresh fish on the Grimsby Fish Market is sourced from sustainable fish stocks from all around the world.

Fresh fish is also imported from faraway shores too, from fresh Sashimi grade Tuna to Swordfish and Snapper from the warm waters of Sri-Lanka and the Indian Ocean with varieties to match all tastes and guaranteed quality.

From the days of the government’s Beeching Act which closed down railway links from Grimsby to London there have been mobile fishmongers traveling to London and the surrounding counties as part of the biggest national fish distribution network in the country. 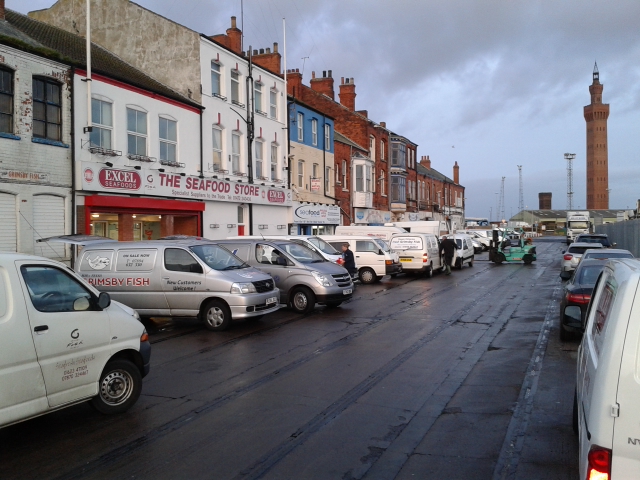 The famous Grimsby Dock Tower can be seen in the background; a smaller square tower alongside the dominating 309 feet tall main tower built in 1852 after the style of the Torre del Mangia, Italy. Originally for hydraulic power working fifteen dock cranes and the lock gates. The Dock Tower is the symbol of our great Lincolnshire town, and I am proud to display on my current van ..

Grimsby has over 100 mobile fishmongers travelling all over the country, and I am one of the lucky ones whose round is in the worlds greatest capital, London.

Some have been operated for decades by their original founders, some handed down from father to son and others started up more recently by ex-fishermen and local industry workers who lost their jobs when Europe took control of Britain’s traditional fishing grounds.

It’s not a job for indoors types as the Van Lads are outdoors in all weathers come rain or shine, snow or thunder from before daylight until after dark.

On board my vehicle weekly you will find most if not more varieties and species found in any supermarket, and more likely to a “fishmongers slab” down a busy high street. From Cod, Haddock, Hake & Plaice, Scottish Superior farmed Salmon; Organic Salmon and very occasionally wild caught Salmon.

Prime fish, these include Lemon & Dover sole, Halibut, Monkfish, Brill and Turbot to some of the lesser known species like Witches, Megrims and Dabs… all found in great abundace around the shores of the UK.

Then we have “game fish” such as Tuna, Marlin, Swordfish & Mahi-Mahi, as we hit the summer months, fresh Mackerel and Sardines from the ports of Newlyn & Brixham .

Fresh Rainbow Trout, whole fish or  trout fillets straight from the farms in Lincolnshire, and when available, wonderful Seatrout.

Seabass & Dorade Bream in recent years have become very popular with restaurants, and thanks to sustainble farming methods in Greece & Turkey means this amazing fish is avaialable in the household kitchen, These are available in either whole fish or fillets.

My great love is shellfish, along the east coast from Whitby to Boston we have an abundace of amazing seafood, from whole Crabs, Lobsters, Clams. From further around ours amazing coastline you will find King & Queen Scallops and Oysters – always buy oysters live!

Everyone should try a Kipper once in a while, produced by Pecks Of Beverly these are sold as a whole kippers just naturally smoked.

The one thing we are very good at here in Grimsby is smoking fish. The most popular smoked fish is Haddock. I only purchase natural smoked Haddock, no colours, no dyes, just smoke…

There are only a handful of traditional smokehouses here in Great Grimsby. This unique factor contributed to the granting of ‘Protected Geographical Identity’ for the smoked fish from Grimsby’s traditional smokehouses. (as per genuine champagne and the regional cheeses.) Due to European legislation it isn’t possible to build new ones in the traditional style – only stainless steel kilns are now permitted…More detail on this in the video below.

All those who buy fish in London from me will be pleased to know that my smoked haddock comes with that assurance of ‘Protected Geographical Identity’ and is supplied by Alfred Enderby Fish Smokers of Grimsby as seen in the video:

Proud to be a member

About this website's administrator:

Having worked in the seafood industry for over 30 years for national & international seafood companies, I have a wealth of knowledge I just wish to share, from seasonality information to recipe ideas. I am also a member of the National Federation of Fishmongers with full Public & Product liability insurance, and i’m very proud to display my Food Hygiene Rating of 5 by North East Lincs Council (NELC) and the Food Standards Agency. 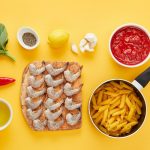